Advertising and reaching people through messaging apps: How they are fundamentally transforming social media making and what to do about it

A fast-growing body of evidence is suggesting just how much social media users’ habits have changed over the last few years. Changes that will drastically affect the way we market to a target audience and how we use messenger advertising.

The fundamental difference is that users are switching from typical social media channels to messaging apps to communicate with each other. Anecdotally, we all know people who now use these apps regularly, such as FB messenger, WhatsApp, WeChat and Kik.
Officially, The Economist reported that over 2.5 billion people now have at least one messaging app installed! This number is expected to reach 3.6 billion over the next few years, especially as the number of mobile phone users greatly increases. There are already more monthly active users on messenger apps than social media accounts. Generation Z (people born between early 90’s and 00’s) will be pushing this trend as they heavily favour messaging apps.

This means that, increasingly, content that has been shared publicly on users’ walls and timelines via standard “share” buttons, whether this be the John Lewis Christmas advert or the latest Instagram hashtag trend, is now being shared on private messaging apps instead.

To give you an idea of how widespread this method of content sharing is; all the way back in 2012, Alexis C. Madrigal, senior editor of The Atlantic, a popular American news outlet, wrote an article containing research into where his article online views were coming from. To his surprise, he discovered that more than half of their traffic was coming from private referrals (from a private source) rather than public ones.

Since then, more research has confirmed this multiple times. It is now believed that over 70% of referrals come from links within private apps like WhatsApp.

Why is this an issue?

Alexis Madrigal coined the term “Dark Social”, because the content being shared does not come from platforms that can be easily measured by Web Analytics. i.e. who sends the private message sharing the content is invisible and unknown to us, as is what is being said about the content by the sender. Often is not possible to see where the click itself came from as the privately sent links don’t contain refer data unlike social media referral clicks.

Little to no web analytics poses new challenges for organisations looking to maximise their digital efforts. Most companies are spending 100% of their digital budget on strategies based off web analytics of around 20-30% of their users. This may not give an accurate view of who their clients/content sharers really are. Potentially you could build a highly inaccurate buyer persona/typical fan model due to this.

It of course, also means that time previously spent on social media is now being used on a different platform, so if your adverts are not spread across the different mediums, you will be missing more popular platforms.
However, consumers consider messaging apps as far more private and may not react well to standard Facebook adverts appearing in personal one-to-one conversations. A different model should therefore be used. 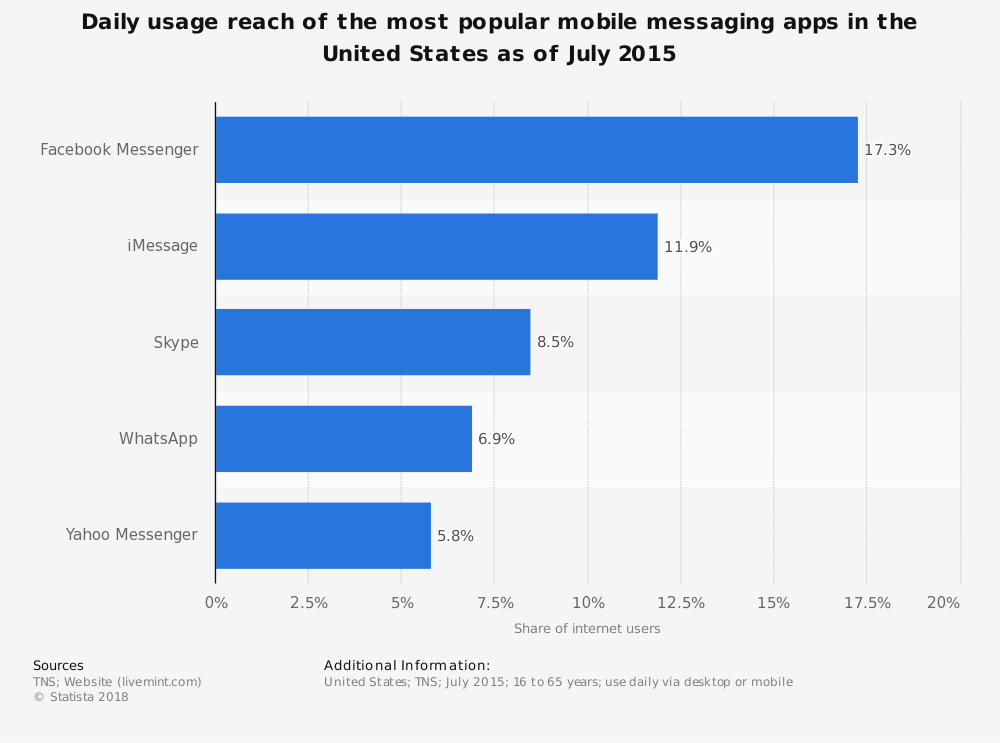 The way forward: Ideas on how to respond to the change and make the most of private messaging apps in the new digital age.

Firstly, if you are using direct messages over social private apps that are not yet associated with advertising (such as WhatsApp), you must be even less intrusive, and even more useful/relevant to solving a customer’s problem than ever before. Users must be assured that any data collected this way will be stored securely, and not compromise them in any way such as by giving personal information to third parties.

Bots, such as Telegram and Chatbots are themselves another opportunity for businesses on these apps. These are pieces of interactive software that will automatically react to users by sending back messages, commands and inline requests. For example, we can message “What’s the cheapest Blender you’ve got?” to a household items supplier, and the bot can reply “Hello (name). Our cheapest Blender is the Junip BlendForce Delta at £15.99. It has a 2 Litre container and 600-Watt motor. Can I help you with anything else today?”

Messenger advertising – What has been done?

Another real example of this is Sephora, a multinational chain of personal care and beauty stores that uses Kik with bots to directly engage with clients. They use a questionnaire to build up a personal profile of the user, and then the bot resembles a real personalised conversation that treats you as an individual, not just a target-market consumer. Here, their customers can instantly get useful information such as makeup tips and recommendations based on unique needs and wants, and can make purchases directly on the app. This is an example of the kind of bespoke, hyper-targeted and personalised campaigns you can execute that would be appropriate for one-to-one message advertising.

These bots can be extremely useful to both consumers, by reaching them on their preferred medium of communication with relevant, precise information, and businesses that will save the cost of employing a person, potentially creating a win-win situation.

Whilst marketing on messaging apps is still in its infancy, several brands have already had success over the last few years by testing the water with new ideas. For example, the comedy website “Funny or Die” created a Kik Card, which is essentially a mobile website that resides within Kik (a popular messaging app). They quickly built up a large following on Kik taking about three months to get to 1.5 million chatters, compared to the 2-3 years it took to get the same number of people on social networks. Some shared content had conversion rates of up to ten percent, which is far above their average Facebook and Twitter rate. They created custom content (usually images and short videos) that could be shared by their contacts through direct messaging without needing to copy and paste a link.

Should you be looking at taking advantage of messenger apps?

Overall marketing on private messaging chats must be considered by all organisations. This is arguably the most fundamental change in how people are using digital communications this decade. Before deciding which apps you invest in, each one should be carefully considered as they all have different demographics and purposes. These avenues should be considered as part of a larger overall plan that hits both traditional public social media and the modern private messaging apps together to get the most out of your digital marketing strategy.

Congratulations! You Buyer's Guide is on its way. Check your emails shortly. If you have any trouble, please contact [email protected]

Simply fill in this form and we will send you to the live data dashboard where you can test out our drilled down data.

Congratulations! You Buyer's Guide is on its way. Check your emails shortly. If you have any trouble, please contact [email protected]

We use cookies to ensure that we give you the best experience on our website. If you continue to use this site we will assume that you are happy with it.OkPrivacy policy